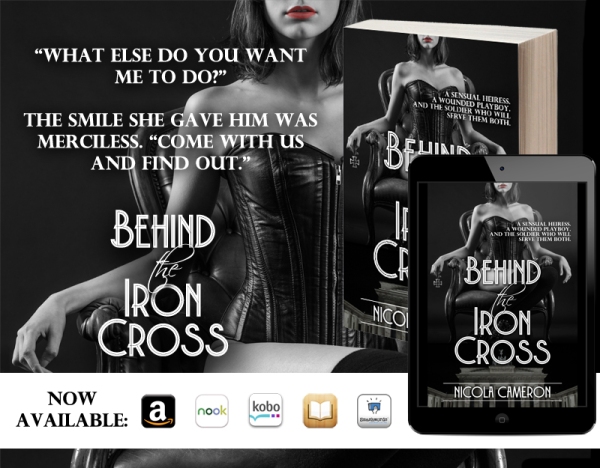 Hey folks! Today I’m happy to introduce you to Nicola Cameron and her story Behind the Iron Cross!

Nicola Cameron is an expatriate Chicagoan who has lived in England, Canada, Holland, and Sweden, and keeps a confusing amalgamation of languages in her head as a result. Currently located in the clavicle of Texas, she has finally mastered the proper use of “y’all,” much to her Chicago family’s dismay.

Hello, and thanks so much for having me on today! While Behind the Iron Cross is my tenth romance novel to be published, it was actually the first one I ever wrote. I started it in 2012, picking at it in fits and starts while working on my other books, and finally finished it in 2018. In hindsight this is a good thing because I needed some serious novel writing chops, far more than I had in 2012, to pull this story off properly. The experience I’ve gained in the last six years is what made this book possible, and I’m very happy that it’s now available to readers.

Also, it means that my editor will stop nagging me to finish it. (Love you, Theresa!) 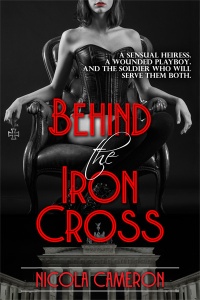 In the hedonistic wonderland of Cabaret-era Berlin…

…where money can buy you anything you desire…

…and love comes with a pink rose and a practiced smile…

The year is 1923, the Great War is over, and Berlin has become the manic playground of Europe’s elite. Against a glittering background of nightclubs and hot jazz, a sensual American heiress, a wounded playboy, and a desperate German army officer forge a decadent pact of pleasure. But their nights of uninhibited passion soon lead to a forbidden emotional connection, one that will threaten their future … and their lives.

Kat followed her men, feeling incredibly relaxed and happy. All of her worries about Schoengraff, the wedding, and her future at Tracy Electric felt like they had been trapped behind a thick, clear wall. She knew they were still there, of course, but they didn’t plague her at all.

And seeing both Friedrich and Sam’s trousers bulging from the kissing and canoodling in the hubble-bubble den was doing wonderful things to her own desire. As soon as the car started moving Sam fell on the colonel like a hungry beast, mashing their mouths together and driving his tongue between Friedrich’s lips. His hand snaked down, cupping the German’s undoubtedly aching cock and squeezing it.

It seemed only right to join in. She leaned closer to Friedrich, pressing her breast against his arm as she nibbled and sucked on his earlobe, whispering filthy things into his ear. He gave Sam a last kiss and turned to her, groaning as she undid a button on his shirt and slid her fingers inside to caress the skin there.

Sam moved back in, biting at Friedrich’s neck then soothing the sting with a lick. A fleeting thought crossed Kat’s mind, a wish to have both of her beautiful men naked and in bed with her. All three of them creating a tangle of bodies and limbs, so close that no one could tell where one ended and another began, and to hell if it shocked all of Bridgeport and its stuffy, stodgy society.

At some point the car stopped and the door opened, Horst looming in the opening. The next thing Kat knew they were up in the suite. How, she had no idea, but she was absolutely delighted by it. She led her men into her bedroom, kicking off her shoes as she went.

Laughing, Friedrich fell on Sam, pushing him into the bed and kissing him greedily, opening his mouth to the American’s. “You feel so good,” he said softly, dropping soft kisses over the other man’s chin, cheeks, nose. “Why do you feel so damned good?”

“I can help with that,” Kat said. She started unbuttoning his shirt, laughing as her fingers fumbled on the tiny mother of pearl discs.

Friedrich stared up at her, naked adoration on his face. He lifted a hand, brushing her cheek with a tender finger that sent shivers down her spine. “You’re so beautiful, Kätzchen. So strong, like a goddess.”

Kätzchen—kitten. Tonight, she would accept that once-hated nickname, especially since he finished up by calling her a goddess. “Clothes, colonel. Let’s get you out of them.”

She quickly stripped him, leaving him naked and gorgeous on the fine sheets while Sam fumbled with his own clothes. Friedrich looked down at his magnificent cock, already hard and pearling a drop of pleasure at the tip, and laughed at it. Sam joined in, and Kat followed. Everything felt wonderful.

The men rolled into each other’s arms and started kissing again, hands roaming muscular bodies and caressing, squeezing, stroking as she watched. It was wickedly delicious, the sight of these two beautiful creatures pleasuring each other. She stripped slowly, reveling in the heightened sensation of her skin as it was exposed to the room’s cool air. She dropped her chemise, then her corselet to the carpet, peeling off the fine silk stockings last and draping them around her neck like a stole. They caught on the chain there. Mustn’t snag the stockings. There were things she could do with them, wonderfully dark and heady things.

She unhooked the chain and tossed it and the key onto the bedside table. Crawling onto the bed, she gently pushed Friedrich onto his back and away from Sam, slithering down into his arms. “My turn,” she purred.

His eyes were thin rings of blue around wide black centers, the eyes of a child on Christmas morning who had just seem the mountain of presents awaiting him. “So beautiful. You’re so beautiful.”

She stroked his cheek, feeling the fine prickle of his beard. “So are you, my colonel. The most beautiful man, isn’t he, Sam?”

She wanted to kiss Friedrich again, taste his mouth, feel his tongue dancing slickly around hers as they shared breath and heat. A faint voice in the back of her head murmured something in a warning tone, something about discipline and too much indulgence. She didn’t care. She wanted this beautiful man, and she was going to have him.

Nicola Cameron, thank you for stopping by today! 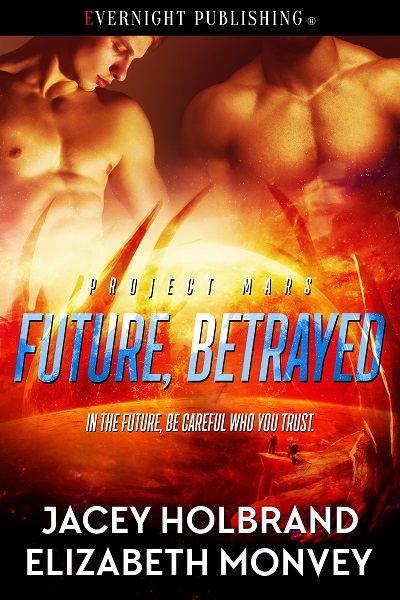 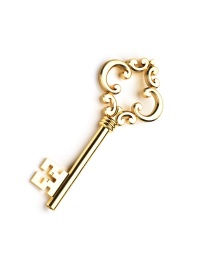 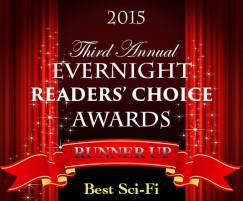 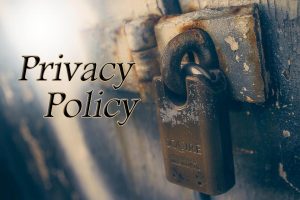